Camping at campsites in Croatia

Imagine ... You are sung awake by the birds, you unzip the tent and the sun beams at you. The view is beautiful and it is not yet possible to take a dip in the clear blue seawater from the tent. That's camping on campsites in Croatia! A true paradise with an azure blue sea, rugged coasts and picturesque villages and towns. The diversity is great and almost everything exudes history.

Sun Sea Beach! When on holiday, we like sun, it's that simple. Then you are in Croatia </ good. On the coast, the temperature rises nicely in the summer, but it doesn't get much warmer than thirty degrees: a gentle sea breeze provides welcome relief. No wonder the Croatian coast is well frequented by beach lovers. The northern peninsula of Istria is very popular, but there are also heavenly beaches further south. The sea is clear and bright blue, the many pebble beaches spacious and clean. The Croatian coastline of almost two thousand kilometers is rugged and rugged. The coastal road takes you past attractive harbor towns where you can enjoy fantastic food. From marinated anchovies to fresh crustaceans and shellfish, squid salads and a grilled sea bass.

History is in the street, in Croatia. Ancient cities and villages: you will find them on the coast and inland. Everywhere you see Italian influences, due to the centuries of domination by the Venetian empire. Even the street names are on the signs in Croatian and Italian. Beautiful old towns to stroll through are Rovinj, Porec, Split and Zadar. Also special is Dubrovnik, whose city center, which has been restored in detail, is on the Unesco list. In Pula you will find the amphitheater, where nowadays mainly concerts are given. Back in the day, under Emperor Augustus, just like that 23,000 people watched executions and gladiators fighting lions at the same time. Split is another gem along the Croatian coast. In any case, visit the palace of Diocletanius, the Roman emperor and be amazed at the details that have been preserved ....

Day trips to Zagreb from campsites in Croatia

The largest and also capital of Croatia is Zagreb. Take a day trip to Zagreb from the campsites in Croatia. Various festivals are organized during the camping season. Enjoy good food and drink during a culinary festival or take a journey through time in one of the festivals where the rich history is central.

Sailing off the coast of Croatia

The Croatian part of the Adriatic is ideally suited for enjoying a boat. Relax and float on the azure blue water and enjoy all the beauty that the area has to offer. Along the coast of Croatia and on the islands you can easily moor in large and smaller charming harbors. Here you will find numerous boulevards, restaurants and shops. Definitely recommended during your camping holiday at one of the Croatian campsites.

Dubrovnik is a port city in the region of Dalmatia and is surrounded by an almost two kilometer long city wall with bastions. The city has been placed on the World Heritage List by UNESCO. View the famous Regents Palace and the many well-known churches and monasteries. Stroll through the cozy Mediterranean streets and immerse yourself in the Croatian monument heritage. Camping near this impressive city? Which can! There are campsites just ten minutes by car from the city.

A special natural phenomenon is the Plitvice lakes National Park. Over thousands of years, the flowing water of the Koran River has created travertine dams. Travertine is a type of limestone. These dams have formed a number of lakes, caves and waterfalls. In total there are 16 lakes with almost a hundred impressive waterfalls. Bears, wolves and many other rare plants and animals live in the forests around the park. The National Park has been on the UNESCO World Heritage List since 1979. From the campsites in Croatia, visit the Plitvice lakes and be amazed.

A valid passport or European identity card is required. Motor vehicle drivers must have a valid driver's license, vehicle registration certificate and green card. If you are driving a trailer or caravan, you must have the papers with you. Croatia has been a member of the EU since 2013, but is not participating in the Euro. You can pay with the Kuna in Croatia.

Campsites in Croatia by the sea

If you are looking for sun, sea and untouched nature, camping in Croatia is a perfect idea. Campingnavigator always selects the best campsites in Croatia by the sea in its range. The reason for this is that campsites by the sea offer the ideal combination between relaxation and activitiesto undertake. In this way, the offer on our website is interesting for every camper. Whether you go out with your children or alone with your partner. The Mediterranean climate also guarantees warm, radiant summers and a pleasant early and late season. It is therefore ideal for traveling with the family to campsites on the Croatian coast during the spring and autumn. Take a quick look and discover your perfect campsite in Croatia for yourself!

Pearl in the Adriatic - Relaxing on Rab

Enjoy the Mediterranean sun, hidden bays, fantastic gastronomy or simply stroll around the narrow streets of a two thousand year old town ... This is possible on the Croatian island of Rab, one of the greenest islands in the Adriatic Sea. When you visit the island of Rab canoeing is an absolute must. Imagine calmly lowering your paddle into the crystal clear waters of the Adriatico. You canoe around the town of Rab, which is located on an elongated peninsula. The four medieval towers let you interact lazily. They are less than 360 meters apart, and give the town its very own look. The one of Saint Mary is the highest, at 26 meters. Then comes the oldest bell tower: Saint Andrew, from the eleventh century. The tower is part of the monastery of the same name in which six nuns are housed, two of them under the age of thirty. Their faith forbids them to go outside the monastery walls. The third bell tower is that of Saint Justina, with its uniquely shaped hood, and finally, the tower of Saint John, near the old city wall, from where you can perfectly photograph the four bell towers. The rocky bottom slides under your canoe, and in the sunlight you see small fish flash by in fright.

In the town you visit the pastry chef Vilma. She has 'Rabska Torta' as a specialty on the menu: pastries made of almonds, sugar, orange and lemon zest, marasquino (cherry) liqueur and some secret ingredients. An eight hundred year old recipe that is passed on from generation to generation. It results in a tasty, very sweet curl. It takes a while to get to the highest point of Rab: the Kamenjak, at 408 meters, the most beautiful viewpoint on the island. The north side is a kind of lunar landscape. Here the Bora has free rein: the relentless wind blows the mountain wall bare and nothing grows because of the salt whipped up from the sea. When you turn around, the green side of Rab unfolds. You have a view of the town, the bays around it and the Dolineiland that is only inhabited by sheep. And in the distance Kalifront, the dark wooded peninsula from which Rab owes its Roman name: Felix Arba, which means happy, dark and green ...

A completely different side of the island of Rab is the touristy town of Lopar, with its stretched sandy beach. Quite rare in Croatia, because most of the beaches are made of rocks and pebbles. Also special here are the bays, a little further away, which can be reached via unpaved hiking and cycling trails, such as the Sahara Bay. In the evening you eat absolutely delicious in the best restaurant in Rab: Labirint, run by young guests who - if you explain that you mainly want to photograph local specialties - put one delicacy after another on the table. Marinated anchovies, squid salad, shrimp risotto, squid ink 'blackened' risotto, scallops, grilled sea bass and of course Rabska Torta for dessert. Life is good, to Rab!

Imagine ... You are sung awake by the birds, you unzip the tent and the sun beams at you. The view is beautiful and it is not yet possible to take a dip in the clear blue seawater from the tent. That's camping on campsites in Croatia! A true paradise with an azure blue sea, rugged coasts and picturesque villages and towns. The diversity is great and almost everything exudes history.

Camping Vita
Croatia | Zagreb | Tuheljske Toplice
Camping Vita - Terme Tuhelj is a ***** campsite . Camping Vita Terme Tuhelj is located 10 km west of the Zagreb-Maribor highway, where you leave the highway for the Zabok exit. From central Slovenia it is also accessible via smaller border crossings, such as Bistrica ob Sotli or Stara vas - Bizeljsko. Camping Vita has 56 ... SHOW MORE 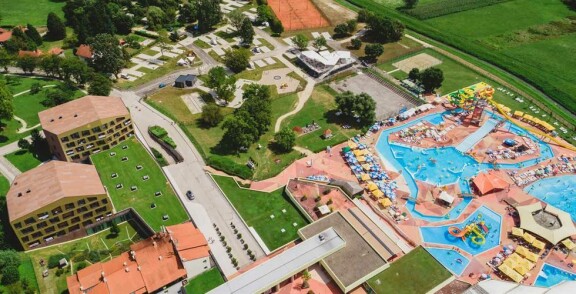 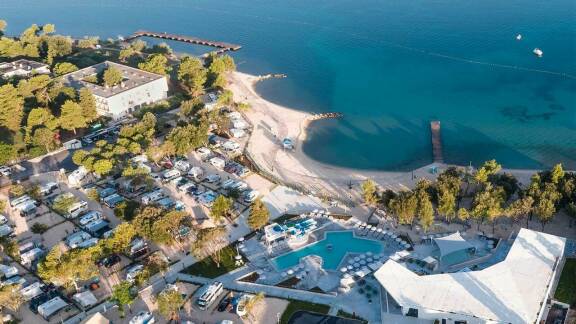 Camping Arena Kažela
Croatia | Istria | Medulin
The campsite is partly wooded with lots of shelter, but also has open areas. The campsite has a secluded area for naturists with its own beach. Camping Kažela has ultra-modern and new mobile homes facing the sea. Both the FKK section and the so-called textile section have renovated toilets. A lot of entertainment is poss ... SHOW MORE 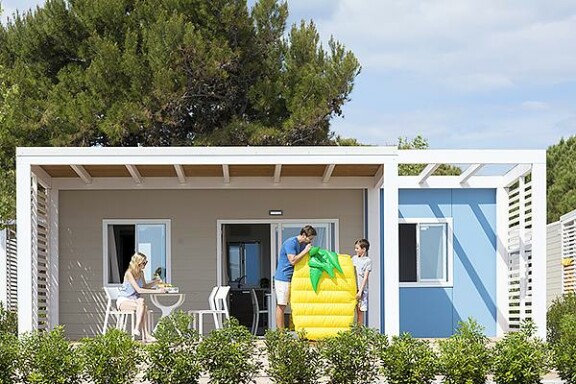 Camping Strasko
Croatia | Dalmatia | Novalja (Eiland Pag)
Camping Strasko is located in a beautiful bay by the sea within walking distance of the town of Novalja, which is the tourist center of Pag. Novalja is a cozy town, where you can taste the friendly atmosphere and the hospitality of the locals everywhere, which make the guests decide to come back here for many years. The 7 ... SHOW MORE 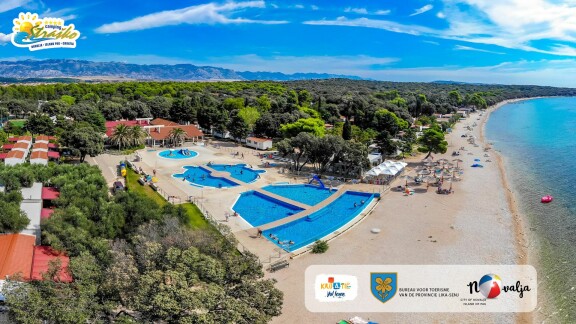 Naturist Camping Konobe
Croatia | Kvarner Gulf | Punat-Krk
In a well-protected bay, about 3 km from the town of Punat, the naturist camping Konobe is located. On the sunny terraces, rich in Mediterranean herbs, the culture and the free feeling of naturism is promoted here. Here you live with nature and in nature. You are awakened by the singing of the birds and by the sound of th ... SHOW MORE 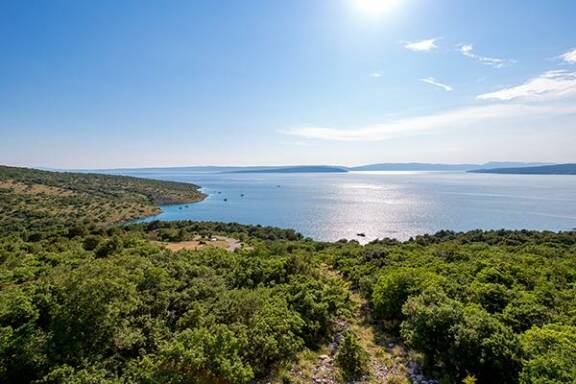 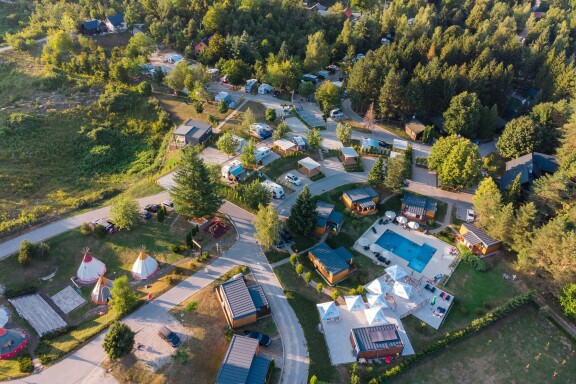 Camping Pila
Croatia | Kvarner Gulf | Punat-Krk
Camping Pila is a family campsite with good facilities, such as a shop and restaurant. Recently, 132 demarcated camping pitches have been completely redecorated. Plateaux have been made along the sea as a sunbathing area and are easy to get into the sea. On the boulevard is a nice walk to the town Punat with its nice shop ... SHOW MORE 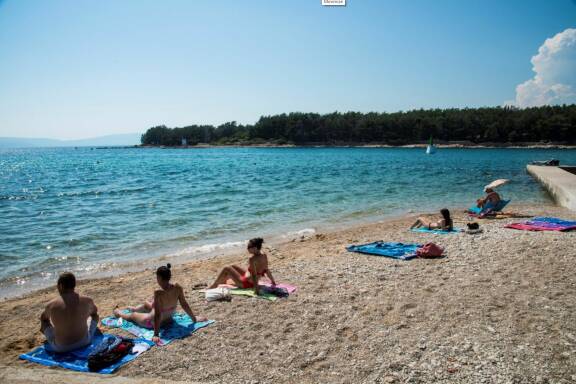 Camp Omisalj
Croatia | Kvarner Gulf | Omišalj
Campsite Omišalj is located right on the coast, in the quiet but picturesque cove Pušća, near the town of Omišalj, and extends over 8 hectares, covered with Mediterranean vegetation. Open all year from 01-01-2022. 5 reasons for a top holiday on Krk Beautiful nature, Mediterranean climate, exceptional cultural traditio ... SHOW MORE 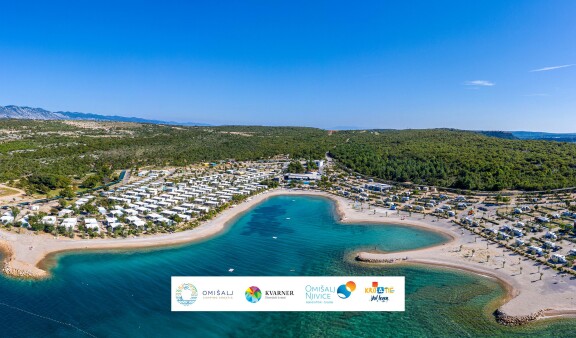 Orsera Camping Resort
Croatia | Istria | Vrsar
The campsite has partly flat terrain, but there are also terraces that help to keep your fitness level. The camping pitches are at different heights and therefore offer a beautiful view of the Adriatic Sea and numerous islands. Trips can be made to the historical, tourist places Porec and Rovinj in the vicinity. Camping ... SHOW MORE 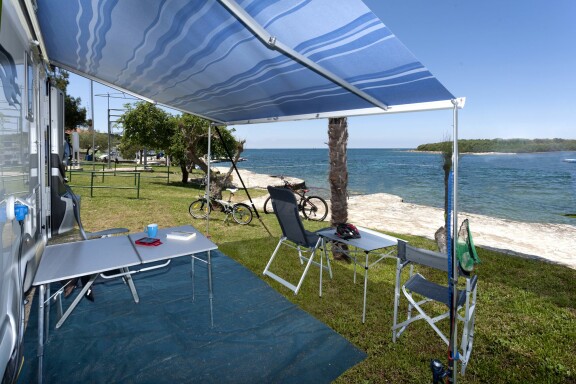 Camping Eco Camp Rizvan City
Croatia | Karlovac County | Gospić
Eco camp "Rizvan City" is located in a small village Rizvanuša in the heart of some of the most beautiful landscapes in Croatia. The camp is surrounded by beautiful landscapes and situated at the foot of the Velebit mountain. Camp is located at 600 meters above sea level in the Velebit Nature Park, only 30 kilometers fro ... SHOW MORE 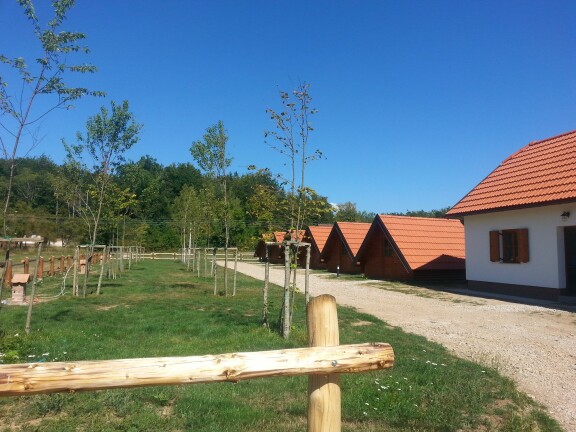